The Church in Wytham
We believe the current church to be the third in Wytham.  The first reference to a church in the village dates to 1135.  Built in the early 12th century, the village it served then lay further north than today.  The second church was built about 1499, close to the current All Saints – it seems unlikely that there would have been a church in this location before Wytham House (now Wytham Abbey) was built in the early 15th century. 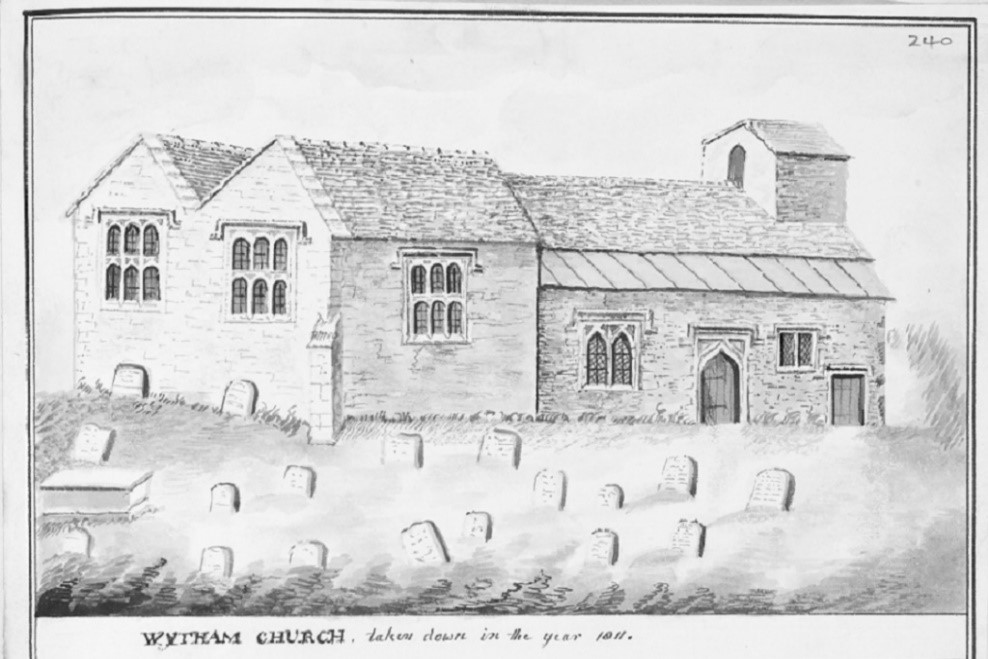 The medieval church, demolished in 1811

The Wytham estate was originally owned for many years by Abingdon Abbey.  It was acquired by the de Wytham family towards the end of the 11th century.  They in turn sold it to Sir William Harcourt about 1479.  He remodelled the estate considerably, and probably built the second church.  Finally, it was acquired by Lord Williams of Thame after the disolution of the monastries.  His descendants owned the Wytham estate until the 7th Earl of Abingdon sold it to Colonel Raymond ffennell in 1920.

During alterations to this estate, Montagu Bertie, 5th Earl of Abingdon, rebuilt All Saints in 1811-12.  He recorded that the previous building was ‘so ruinous as to be dangerous ....to assemble for divine worship’.  Most of the material used was reclaimed from the old church or other old buildings.  It now consists of a chancel, nave, north porch (built from material reclaimed from the old south porch) and a west tower. 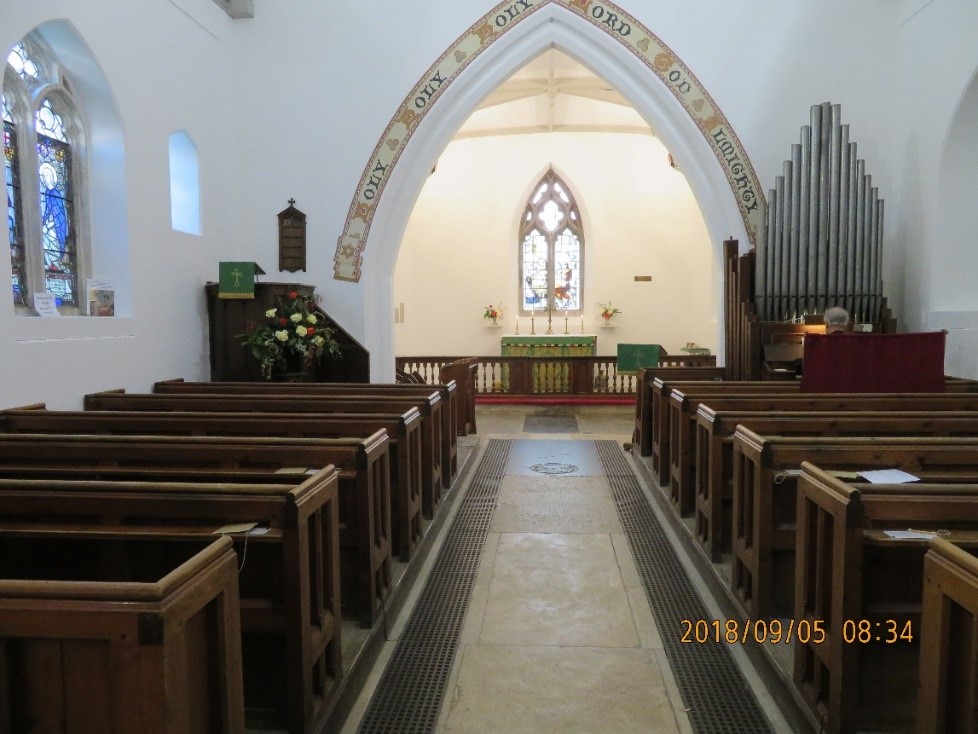 The interior of the current All Saints

Six corbels carved with heads support the roof.  The four in the nave, dating from the second half of the 14th century, are not a set, their varied size suggesting they came from a larger building.  The two corbels in the chancel however, appear to have been made for the church.

The hammerbeams of the roof above the corbels are decorated with painted shields.  The church has a gothic-style Caen stone font, and is fitted with pews, pulpit, and a west gallery.  There is a shield on the front of the gallery commemorating the coronation of Queen Elizabeth II.  The altar rails from the previous church were extended to fit the wider chancel by the addition of two plain panels matching the pulpit.  The altar table (1626), the church chest (1637) and the poor box also remain, as does a pall to cover the coffin at funerals made in 1635, the embroidery now very fragile.

The Memorials
On the chancel floor are two figures and three shields, including the coats of arms of de Wytham and Golafre - all that remains of a brass of Robert de Wytham (d. 1406) and his wife Juliana Golafre (d.1408).  Their son, Richard, had a daughter Agnes, the last of the de Wythams, who was taken as his heir by John Golafre, (her second cousin).  The brass was probably made after her death in 1444, in memory of her grandparents, her father and herself.  When the current church was built, this brass, together with an explanatory stone produced by the 2nd Earl of Abingdon, was squashed into its present location. 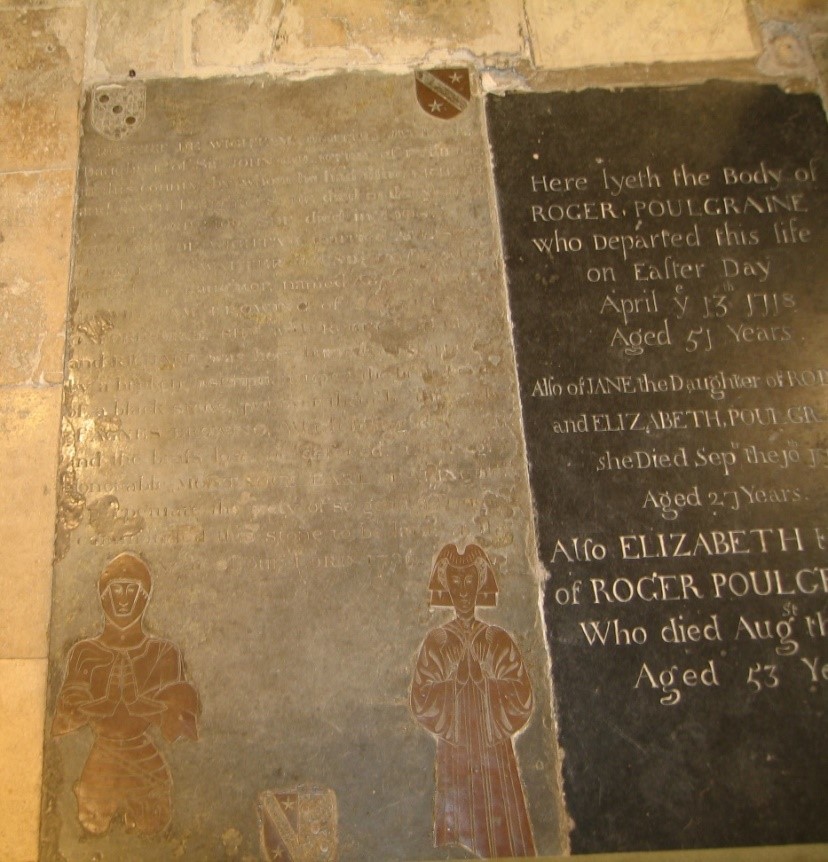 The memorial to the de Wythams.

Nearby is a memorial to Colonel Edward Purcell (1656 - 1717).  The inscription describes his military career, records that he was a brother of Henry Purcell the musician, and that he retired to Wytham ‘decayed with age and broken with misfortune'.

A tablet on the south wall of the nave near the gallery, put up in 1964 by the Parochial Church Council, commemorates Raymond, Hope and Hazel ffennell, the last owners of the village to live here.

The Stained Glass
The stained glass in the windows came from a variety of sources.  It ranges from late 14th century pale stain, through 17th century enamelwork and 18th century painted pictures, to leaded modern stained glass, added after the 1812 rebuild. This is unusual in such a small church.

The windows on the north side of the nave contain five early roundels of white glass with yellow stain.  In the top of the larger window is a man sheep-shearing - perhaps one of a set of roundels showing the ‘Labours of the Months’.   Beneath are the heads of a king and queen.  They probably came from the original church.  Four appear to be of the same date, at the very end of the 14th century, and may have come from the Oxford glass workshop of Thomas Glazier. 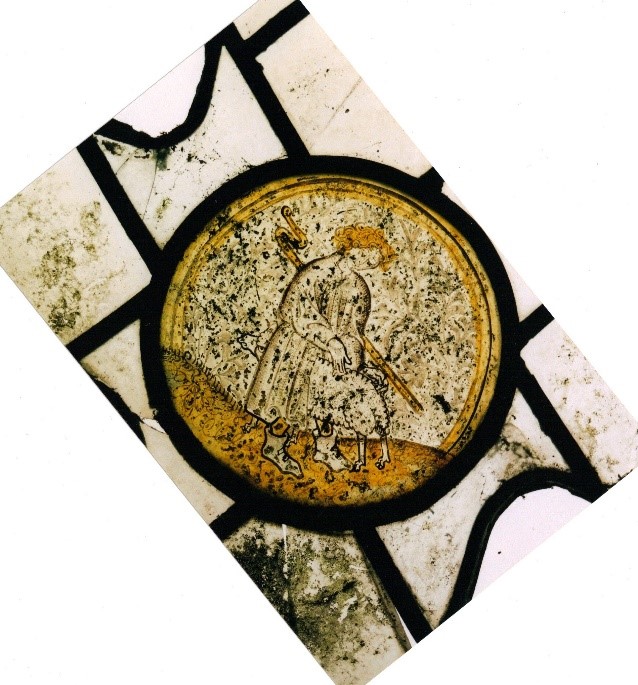 A man shearing a sheep

In the smaller window is a roundel containing a figure of Our Lady at the Annunciation.  Beneath is a later roundel, possibly about 1480, showing the eagle of St. John, presumably one of a set of the signs of the four evangelists.

The main 18th century painted glass in the east window shows the Adoration of the Shepherds.  It is in the style of Joshua Price (d. c. 1722), who made other similar windows.  Above it is a piece of armorial glass, displaying the connections of the Bertie family about 1630, before they came to Wytham.

In the south chancel windows are several medallions of ancient date, five bearing Scriptural scenes and others coats of arms.  The crowns at the top of the right-hand window, and the two diamond panes containing a portrait of Edward VI and his coat of arms, came from Wytham Abbey.  Beneath these diamond panes is an early 16th century coat of arms with a wreath, the arms of the Dormer family – Charles, 3rd Baron Dormer married into the Bertie family in the 17th century, and Montague Bertie, 7th Earl of Abingdon, married Gwendoline Dormer in 1883, so the shield is appropriate here.  The shields in this window commemorate the marriage in 1648 of Montagu Bertie, 2nd Earl of Lindsey, and Bridget, Baroness Norris.  Their son, James Bertie, was created Earl of Abingdon in 1682.

On the south side of the nave the easternmost window contains 19th century style stained glass, showing Christ and Mary Magdalene in the garden.  It was installed in 1912 by subscription from the villagers to celebrate the hundredth anniversary of the rebuilding of the church.

The clock
Made by William Taylor of Oxford, in  1837.  The All Saints clock is a mixture of cast and wrought iron, with gunmetal brass wheels.  It is a finely made clock with a two-second pendulum 13ft long, a rack striking mechanism, locking plate striking and a 5ft 6ins copper dial.  A clock similar to that in All Saints would have cost about £120 in the 1830s.

The bells
A peal of ten bells was fitted in 1951 by Hope ffennell in memory of her husband Raymond and daughter Hazel.  They are operated through a carillon, as the tower is too small for them to be swung conventionally.

The organ
Built by the Positive Organ Company about 1895, Works No (Op.) 154, and designed to be played by a pianist with no previous experience of playing an organ.  It has been in the church since at least 1903, and was overhauled in 2001.

This is only an introduction to the long and interesting history of All Saints church.  For more information, please see the two booklets on the church and the village on sale in the church.  If you have a specific question on the history of the church, please email: David Humphrey on This email address is being protected from spambots. You need JavaScript enabled to view it.

Copyright © 2019-2022 All Saints' Church, Wytham
The Wytham Village website uses cookies to ensure you get the best viewing experience. By continuing without changing your settings, we'll assume that you are happy to receive our cookies.
I'd like to find out more... I accept I don't accept
Click to listen highlighted text! Powered By GSpeech