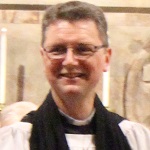 On Monday night and all through Tuesday, we had wild stormy weather and we could constantly hear the wind and rain beating on the windows. On the Monday evening, I was sitting in the small lounge, where there was a warm fire glowing.  It felt very apt – the wind and the rain like all the threats beating on us at this time – the Coronavirus, Climate change, political uncertainty and so on. But the warm fire felt like the warm fire of God’s love, strong, protective, warming our hearts.

We had some wonderful talks on the Retreat. On the first day the talks were very challenging! We heard about Charles de Foucauld, a man who lived a dissolute and self-indulgent life as a young man, and then when he found faith, went the other way, giving up everything for Jesus. He even refused to be ordained, because he didn’t want to have any status. Later in his life he asked to be ordained so he could go by himself deep into the desert to be a missionary amongst the Tuareg people. He lived there the rest of his life, loving those he lived amongst, until he was martyred at the age of 58.

Charles de Foucauld longed to find a community – with the name “the little brothers and sisters of Jesus”. It finally became established about thirty years after his death. Perhaps even more significantly, while in the desert he wrote of his extraordinary experiences of God in prayer, especially at night time, describing a warm close intimate relationship with God, a beautiful relationship of joyful love. His letters and writings are deeply valued by many people.

Later in the day we heard about Therese of Lisieux, who entered an enclosed Carmelite order at the age of 14 and died of tuberculosis at the age of 24. Though she was so young and had such a short life, Therese’s writings show a warm and vibrant personal faith, an astonishing closeness to God, combined with a clarity of thinking and a striking honesty.

At the end of that day, I was left with a sense of the love of Jesus like a blazing fire of passionate love – a blazing fire that challenges us, fires our hearts and drives us to prayer – prayer for others and prayer for the world.

On the second day, we heard about Julian of Norwich, who lived in the middle ages. Julian lived through the Black Death , when millions died across the world. She later became very ill herself, and as she recovered, received what she called “Showings” – visions which she described as “Revelations of the Divine Love”. She thought and prayed about these showings for twenty years before she wrote them down. In them she gives us an extraordinary picture of the gentle courtesy of God, and uses words to describe Jesus like homely, friendly, courteous, one who comforts us.

Later that second day we heard about the Abbe de Tourville, who retired from his ministry due to ill health, but then became a source of encouragement to many. He wrote letters describing the love of God in the language of gentleness, tenderness and intimacy, and encouraged those who came to him to be gentle and forgiving towards themselves as well as towards others.

For me, those two images seemed to illustrate two different parts of the character of Jesus, two different aspects of his love: the blazing fire that challenges us and drives us to prayer – but also protects us and keeps out the cold – and also the warm comforting homely fire, that encourages us to love one another and to be gentle with ourselves.

So as the cold wind of the Coronavirus blows across our land, perhaps those two images might be helpful - the love of Jesus like a blazing fire, that challenges our selfishness, calls us to prayer, and is also our strong protector – and that warm gentle homely fire that comforts us, and encourages us to be loving and gentle with each other and with ourselves.

Copyright © 2019-2020 All Saints' Church, Wytham
The Wytham Village website uses cookies to ensure you get the best viewing experience. By continuing without changing your settings, we'll assume that you are happy to receive our cookies.
I'd like to find out more... I accept I don't accept
Click to listen highlighted text! Powered By GSpeech